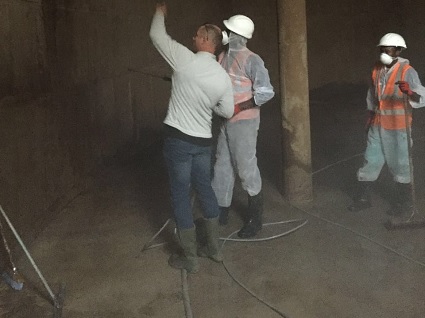 The hospital was founded in 1938 and is famous for being the location where the first heart transplant was performed by Prof. Christiaan Barnard in 1967.  The reservoir supplies water to the entire hospital via further holding tanks located in various sections of the hospital.  It holds approximately 8,000 kilo-liters of water.

Various alternative options were considered.  First, they could rebuild a brand new main reservoir, which was not an option because of time and cost restrictions.  Structurally the reservoir was still in very good condition.  Certain leaks had been detected over the years, which were patched only to re-occur at a later stage.  Besides the leaks, the water in the reservoir was also being contaminated by pine needles from nearby pine trees.  Although not a serious health hazard, the pine needles were finding their way to the renal unit in the hospital and clogging its water purification filters.  It seemed that the pine needles were finding their way into the reservoir via a slight gap between the concrete lid of the reservoir and the wall structure.  Over the years the copings had become loose and some had fallen off, creating small gaps where the pine needles worked their way in.

The Engineers at the Department of Health chose the TRITOflex liquid rubber solution to solve their problems, due to its following characteristics:

The whole inside of reservoir, minus the ceiling, was sprayed with the TRITOflex monolithic rubber membrane at 1.5mm (60 mils) dry. The joint where the walls meet the roof was also sprayed, therefore preventing pine needle contamination. On the outside, TRITOtrowel flashing compound was also used as the primary barrier to pine needle contamination before the copings were reattached.

The Western Cape Department of Health has now specified the Triton line of products as a solution to all matters pertaining to water storage and various roofing issues. A smaller project at Riversdale Hospital was completed with further projects at larger hospitals such as Tygerberg being planned.