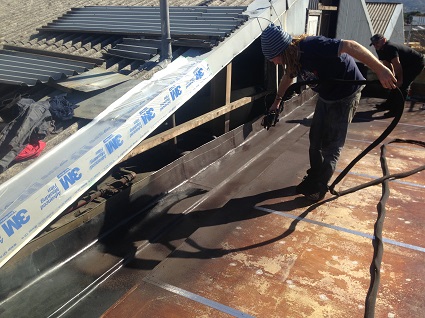 An extreme storm blew the EPDM roof loose on this office and the client saved 30% by choosing an alternate to torch-down modified bitumen.

The EPDM roof over this client’s office in Lower Hutt, New Zealand was blown loose after a big storm passed through the area. The EPDM membrane became wrinkled, unadhered, and had exposed the building to moisture entry. The building owner needed a quick solution to prevent further water damage to the tenant-occupied spaces, especially as Aotearoa (the land of the white long cloud) was at the start of spring rains.

The building owner met with a local roofing company and received various quotes for a new torch-down Modified Bitumen roof system to be installed directly to the plywood deck in place of the damaged EPDM membrane. However, the roofing company was so busy working on other roofs damaged in the storm that the work could not be done for 6 weeks. When they could begin, it would take 2 weeks to install the new Mod-Bit system. In the meantime, the building owner approached a local CBANZ (Certified Builders Association of NZ) member to help remove the skylights and replace some of the plywood. When this builder saw the condition of the roof, he mentioned a product he had seen called TRITOflex. JVL Contractors Ltd., a TRITOflex Approved NZ Applicator, was then approached by the builder to offer suggestions and a quote to replace the roof with the TRITOflex liquid rubber system instead of Modified Bitumen. JVL recommended the EPDM be removed, the plywood properly repaired and prepped, and then TRITOflex rubber membrane sprayed directly to the plywood with the energy efficient TRITOtherm top coat to finish.

Now with two options in front of them, the client was pleased to hear about differences between Modified Bitumen and TRITOflex seamless rubber and also pleased to see the cost difference. JVL completed the job completely, start to finish, in 5 days. Far quicker than the proposal for Modified Bitumen. On top of that, the owners saved 30% in comparison to their original quote. The loose EPDM was removed, the plywood roof was scraped clean and primed, TRITOflex was sprayed to 2mm (80 mils) dry in one coat, and then two coats of TRITOtherm were sprayed and rolled over the TRITOflex membrane to provide energy savings and create a sustainable system.